Titanfall 2 - The Story So Far 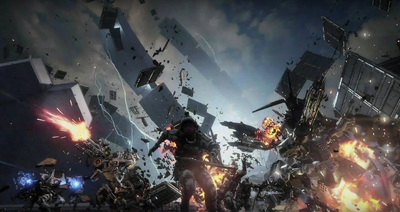 The Story So Far[edit | edit source]

The following events are displayed relative to the start of Titanfall 2: therefore, all dates will be marked with "BTF2" as a signifying point, showing time before Titanfall 2. These dates are all rough estimates. 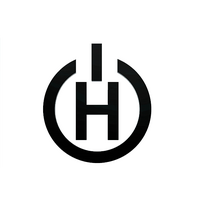 The battle of Angel City was a major turning point for the frontier. During this battle, the IMC flagship known as the IMS Sentinel joined the battle, and was heavily damaged, forcing a retreat to drydock. After docking at Outpost 207, the ship was destroyed by an infiltrated railgun platform.

Hot on their efforts at Angel City, the frontier launches an attack on IMC Base Golden, and steal the blueprints for the "Dog Whistle" towers, known as the "Repulsor Tower" tech. With plans to these towers, identifying the faults, the Frontier attacks the IMC Refueling Facility at Demeter, disabling the towers and destroying a large portion of the fleet stationed there.

With the fleet protecting Demeter incapacitated, the Militia launches an attack on the planet itself, destroying the refueling facility. MacAllan sacrifices himself to destroy the refueling platform, cutting off the IMC from reinforcements.

Two months after Demeter, remaining IMC personnel either retreat into the core worlds or defect to the Frontier. Hammond Robotic HQ is attacked by these defected troops, cutting off the IMC supply of Spectres to the Frontier. 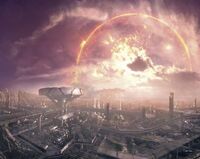 The IMC launches small skirmishes in retaliation, though they pale in comparison to earlier conflicts. They attack the Kodai Mining dig site, with combat spilling over into the nearby resort town.

Though significantly pared down, the IMC Remnant faces an enemy as depleted as they are. With a foothold in deepspace, they begin to reactivate Spectre production, and begin to research energy weapons to counter militia numbers. New Titan chassis are developed and deployed, and exotic technologies on Typhon are located.

During this time, the IMC rebuilds its fleet, wounded though it may be, to near former numbers. Even with this, however, the IMC had lost 1/3 of its total naval fleet - and reinforcements are not coming. When the IMC loses an asset, it must find a new one, whereas the Frontier can call reinforcements - because of this, the combat is attrition based, and is bloodier than even the initial Titan Wars. 0 BTF2 - The Militia has won back control of over 1/4 of the Frontier, and is based off the planet Harmony. They are stronger than ever before, and are in the midst of Operation Broadsword, an operation designed to oust the IMC once and for all. A new technology has emerged on Typhon, however - and it threatens to forever changed the tide of war against the Militia.