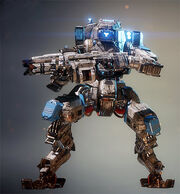 Monarch is a mid-range Vanguard-class Titan that can upgrade itself on the battlefield through her unique Upgrade Core. Pilots select a path of upgrades and try to survive long enough to reach her final form. Monarch's design is based on the salvaged, badly burnt remains of two Vanguard-class Titans recovered by the IMC from the Battle of Typhon. While the Vanguard-class was designed by the Militia for armed recon deep behind enemy lines, the IMC's mandate for Monarch focused on flexibility through survival and support options, to serve many operational roles. Although Vinson Dynamics* was unable to reverse-engineer and replicate key aspects of the original Vanguard design, they brought their own R&D innovations when creating Monarch. One of these innovations is her Upgrade Core, which allows her to improve her combat abilities during a battle, based on options set by her Pilot. Monarch also has an impressive ability to draw power from enemy Titans to recharge her own shields, or the shields of her friendly Titans. Despite the IMC and Vinson Dynamics' efforts to maintain secrecy, several shipments of early Monarch production variants invariably leaked onto the black market, allowing mercenary Pilots and independent manufacturers across the Frontier to discover her true potential.