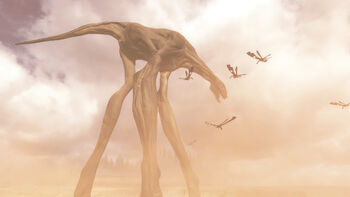 The Leviathan (Creature) is a creature, or class of creature, in the world of Titanfall.

The Leviathan is a lurching, hulking beast, many stories tall. Though they seemingly do not possess any aggression towards those which fight on its planet, it will defend itself with destructive, terrible ability. Little is known about the beasts at this time beyond the fact that they own up to their name, being the largest organic creatures in Titanfall.