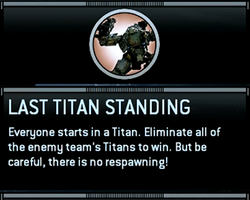 Last Titan Standing is a gamemode in Titanfall. In this mode, you have one Titan, one death, and your goal is to eliminate the enemy team. All players start in Titans, and if you eject, you will not be allowed to call upon another Titan.

How to Win in Last Titan Standing[edit | edit source]

Last Titan Standing is all about utilizing the Vortex Shield effectively. Being aware of your surroundings and using your Vortex sparingly will assure that you survive long enough to destroy a few Titans, but don't be upset if you die after only a few hits. As long as you take at least one person with you, you've done your team a favor.

The Artillery Titan Loadout is meant to deal large amounts of damage from a long range.