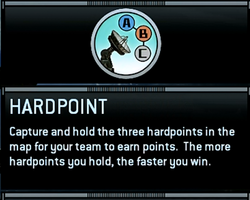 Hardpoint is a gamemode in Titanfall. A modified King of the Hill system, the fundamental point of this game mode is to capture the three points on the map, labelled A, B, and C. This gamemode is also very similar to king of the hill and domination style game modes from that of other first person shooters.

How to Win in Hardpoint[edit | edit source]

Hardpoint is a gamemode that requires a lot of attention to detail and speed. In Hardpoint, capturing points is important, but not as important as actually getting to those points. Pay attention to your minimap, and move as quickly as you can. There are basically two schools of thought you can take with this gamemode:

In this play style, you're capturing everything you can, and then hunkering down and protecting it against everything you can. The rest of the team is likely to seize points, so if you dedicate yourself to protecting a single point with a Titan or with heavy loadouts, you should be able to help the team out more than if you were just moving with the crowd.

Another tactic you can employ is to harass the enemy. As valuable as it is to hold on to a single point, it's just as valuable to move from point to point and harass the enemy team, forcing their team away from capturing points and into defending them.

The Rifleman Pilot loadout is a general purpose assault loadout, designed to present and overwhelming force on the battlefield.

Certain actions in Hardpoint give certain points to the performer.