Before you even start playing the game, you need to choose to use either a controller or keyboard & mouse. 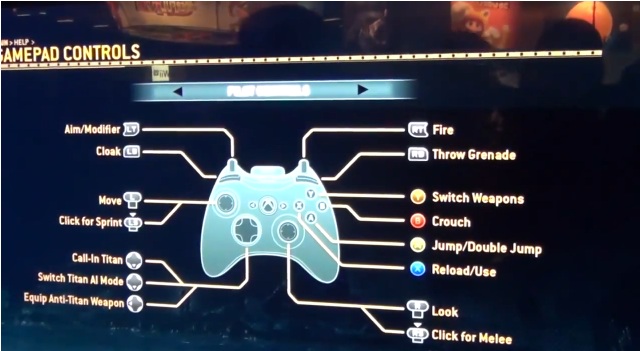 Once you familiarize yourself with these controls, you can start learning more advanced maneuvers. Practice at your own pace. Do not be reluctant to re-map the controls to fit your playstyle.

Next, you're going to learn about the basics of combat in Titanfall. This is where most of the gameplay meets. You're going to need to familiarize yourself with your arsenal.

All of your ballistic weapons, (the ones that fire bullets.) will have recoil and spread. Both of these are things you'll need to manage carefully for you to effectively kill other players and AI. Holding down the trigger and emptying entire magazines at once is the most ineffective use of automatic guns. This is also known as "Spraying." A more effective way of killing enemies is by using short, controlled bursts. Aiming down sights will allow you to do this much more easily than firing from the hip, as you will have greater accuracy and zoom functions. (Magnification of zoom is set by your scope and weapon.) A single well-placed burst can take out another player enemy from long distances. You will need to re-adjust your cross hairs constantly to try to stay on target as your recoil from firing will jar your sight. Even if you maintain perfect recoil control, you still have to stop and wait for your spread to decrease. Weapon spread is your cone of fire, the tip of the cone starting at the tip of your gun and outwards away from you. You want your cone of fire to be as small as possible. While firing, this cone will start to increase, causing your bullets to stray off target.

Grenades and other explosives usually need a surface to trigger. Propelled projectiles such as rockets can deal a tremendous amount of damage on a direct hit. Because rockets have a travel time, trying for direct hits is ill advised. It is much easier and advantageous to instead aim at the ground on which your target is standing. Because of this, higher ground usually favors explosives against lower targets. This way, even a near miss can still inflict efficient damage through what's known as splash damage. Splash damage is when an explosive or similar effect has an immediate area of effect not far from the source. You will kill most of your targets with splash damage when using grenades. Grenades can be very useful in a firefight when encountering multiple enemies, or tough enemies that are utilizing cover. Because grenades have a fuse time, you can not only time an explosion around obstacle, but also ricochet a grenade by bouncing it off of walls and other surfaces when thrown. Cooking grenades IS present in this game, with the Frag Grenade having about a 5 second fuse, and about a 3 second fuse for the Arc Grenade.

Melee is not an effective means of direct combat. It is instead more of a trademark move of killing unaware players, or as a last resort when your firearms are empty. Using the Jump Kick in a gunfight will usually mean death and success is usually just a matter of dumb luck. Even in the slight of events where your melee opportunities arrive, precision movement and footwork is more important than aim. Some of the best times to perform melee on an enemy is while he is reloading. So it may be best to try to dodge and waste all of your enemy's magazine before trying to close the distance unless he is unaware if your presence.

Titans have what's known as a cooldown (A set time in which they cannot be used.) before they can be called. Once you find a suitable spot that has a line of sight to the sky, you can call down your titan. When your titan has landed, you can get inside and resume combat as if you were still on foot. The titan will protect you from small arms and other things that would normally kill you quickly. Do not get comfortable and think you are invincible, as titans themselves have many weakpoints, and are very noticeable large targets. If you are taking a lot of damage from incoming fire, you need to use your Vortex blocker, or get out of harm's way. If you see an enemy titan, you can use any available anti titan weapons you may have, or jump onto the titan's back and shoot its weak spot. Though the latter of these two options makes you much more vulnerable, especially when an enemy titan can easily trample you under it's feet. If you are trying to take an enemy titan out with weapons, guerrilla warfare is strongly recommended. Well orchestrated group work can easily deceive and destroy a titan.

If you're going to play Hardpoint, one thing you may be good at, or develop the skills for, is playing defensively.

There are two different major playstyles to FPS games. Finding your playstyle and realizing it is important as then you can specialize in techniques and other things down the road.

Camping. Camping is a play style in which the player is never moving much or at all from a single spot. Or may stay in one location for a while, and then shift to another spot to continue camping. This is the ideal behavior of snipers. The advantage to camping is anticipation and getting the jump on other players. It also takes advantage of your environment. For example, camping a choke point inside of a building with a shotgun can hold off a lot of enemies from going through.

Another example is leading an enemy outside where your titan is set to assist you. You now have the upper hand and can kill them much easier.

One neutral playstyle is covering fire. How this works is one player shoots at an enemy, forcing them into cover. They then keep firing at them even though they're behind cover because it buys your teammates time to move. The reason this works is because in general, people do not want to jump out into oncoming fire. Players who do generally take a disadvantage and immediantly die due to taking stray shots.

Another neutral playstyle is the buddy system. The buddy system is where you simply pick a teammate or group and follow them. The idea is to have strength in pairs and maximize your chances of survival. Another feat of this playstyle is that even if one of you goes down, it gives the other a chance to retaliate immediately seeing as your enemy would have to kill both of you in a single magazine, it heightens the difficulty situation against you and your teammate.

Making the most of Titanfall[edit | edit source]

You will level up and unlock new customization features as you play the game. Take advantage of this as often as you can. Customizing your loadout to your playstyle is extremely important if you want to be the best that you can in Titanfall. Loadout items you can use to your advantage are things such as the cloaking device, or smoke screen if you want to play evasively. Shotguns can be used in close quarters for maximum lethal effect. Smart pistols can help you dispatch pockets of enemy AI quickly.

It takes more than that to become a great player, however. As you get used to the game, you will find yourself doing a lot of things better than you did before, the learning curve of the game may take you up to a week of continuous play to master, or a month or so for the more casual player. Either way, there are a lot of meta game elements to do on your part in order to truly overcome the competition. These elements include self improvement based on self realization. This means that you need to take note of your own playing behavior like learning from your mistakes every time you die, to trying to learn how to use your team to your advantage without them even realizing that they are cooperating with you. How you do this is entirely up to you. Some players do this through clans and friends they constantly play with. Some do it through FRAPS recordings as they review their own behavior. Is it uncommon for most people to go through these motions, but choosing to can easily push your performance past theirs. Maintaining an open mind and being rational and honest with yourself on your mistakes is the first step in self improvement. If you were killed by running out in front of enemies, getting angry and trying again will most likely lead to an endless cycle of frustration. Instead, take note of why you died, and learn from it. Quickly brainstorming during your respawn timer during match time can help you in small situations. Brainstorming outside of match time about specific recurring problems you face can help your playstyle improve by outsmarting disadvantageous situations.

The more you take sections 1, 2, &3 and apply them, the greater your titanfall experience will be on a personal level. If you followed or are following this guide, it should give you a better understanding of what the basic controls are, learning the basics of the game including your weapons and titan, figuring out your own personal playstyle experience, expanding your skill level and getting farmiliar with the gameplay mechanics.

Being a beginner should be a fun experience but its also an important experience as its your first impression of the game. This is why making the most out of titanfall is the purpose of this guide. Take everything you've read into consideration. Coming back to this guide every now and again in steps may be a more thorough way to digest it at your own pace.

This is a list of useful links you may want to use as a reference while you get used to the game.

Weapons : Page listing all the weapons in the game.
Maneuvers : A list of known maneuvers of both pilot and titan.
Scoring : Page listing all the known scoring rewards in the game.
Loadouts : A page showing all the default loadouts in titanfall, both pilot and titan.
Burn Cards : A comprehensive list of Burn Cards, which are a series of cards that are equipped for a single game and grant status effects.