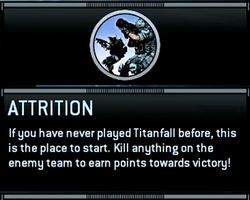 Attrition (Titanfall 1) is a gamemode in Titanfall. This mode combines elements that you'd traditionally see in a singleplayer campaign; Characters, stories, and cinematic moments fused into an online multiplayer match. The objective is to hold off the opposing team's forces in a team deathmatch style mode. Scoring points for getting kills on pilots, enemy AI, and Titans. The first team to reach the score limit wins the match.

How to Win in Attrition (Titanfall 1)[edit | edit source]

Attrition is all about numbers. The best thing you can do to win in Attrition is to get Burn Cards or abilities which reduce Titan build time, and employ them often. Getting a Titan will be what gets the most points, as you will then be able to mow down 90% of the battlefield, and score the much needed Titan kill credits.

The CQB Pilot loadout is designed for close-encounters, and what it lacks in range it makes up for in punch.